It is August 2017, and this is a critical time period. I will tell you the message that I have gathered, from listening to many different "channeled" sources, and from my own intuition. We seem to be in a "Nexus" point, a void in between major timelines. Our focused intent at this time will determine the fate of humanity. I get the feeling that this juncture seems to be of critical importance. If you can read this article and truly understand it, you'll escape a lot of the pain and suffering present on Earth, by altering the timeline.

All current channelings are describing that we need to start taking responsibility for creating our future with precision, not leaving it to chance. We absolutely need to jump to a positive timeline, so it's important to focus with our imagination on the image of the correct future that we want. 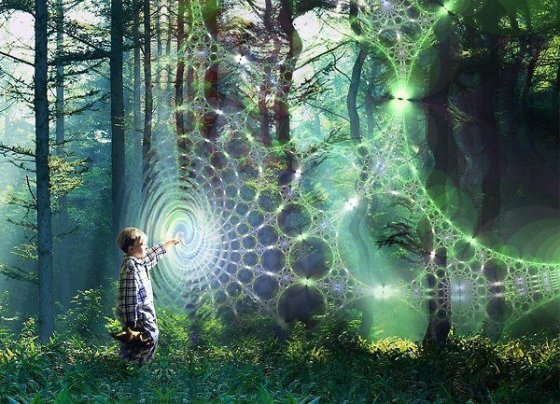 Corey Goode was told that we have a 3 year window, after which, it will be nearly impossible to go back to the good timeline, if we don't create it now. The Trump election was a HUGE timeline jump (Mandela effect). We may have made the jump to avoid nuclear war. We need to jump again, to a reality where there is very little or no war.

Try to envision happiness and security of all the people and all the nations, that's all you have to do. Your mind will create the frequency of the new timeline automatically and we will begin moving towards it. But do not turn on the TV to watch the mainstream News!

Starseeds and light workers are very connected to Source, and have immense creational powers. Whatever images you put into your subconscious, you will begin vibrating out into the field. That's why you cannot turn on the TV, because they carefully select words and images to create the timeline that they want, by using YOUR subconscious, without your consent. If you consent to watching TV and the News media, you are consenting to having your mind programmed automatically, involuntarily. People don't seem to understand this.

If it's easily avoided, do not allow anything to enter your physical eyes or your physical ears, unless it is something safe, productive and helpful for all concerned. This is where taking responsibility comes into play. You are responsible for choosing which version of events to focus on. If you focus on their "TV version" of reality, you'll help to continue creating their version of reality. They carefully choose a "program" to upload into our subconscious mind. TV shows are called "programs."

The News media has never helped a citizen, although we are programmed to believe that it helps, hence our addiction to it. If everyone stopped watching the primary corporate controlled News media today, there could not be war. They are the sole proprietors of the war programming.

We are creating war because we are letting them show us pictures of war, which we then unconsciously project out into the information field, and our Source connection creates a war timeline. Protect your mind.

TV is hypnosis. Hypnosis is defined as programming the subconscious mind to create a new reality. By not watching TV and by not following any mainstream "negative" version of politics, you can focus on happy things, and plant only images of a positive future into your mind.

James Gililand speaks weekly and focuses on positive news events. Many people report positive events and have a positive Podcast that you can get news from. Seek out positive sources. Try to focus on all the good things that have happened lately, including past events that you can read about that were based on love, and try to put the images and the words of a loving world into your mind. If you need to watch happy movies, then that's good too.

It's very simple to begin filtering the information going into your subconscious mind, by changing our conscious actions.

The final key is then using your imagination to visualize the new world that you want to see.

Create an artificial reality in your mind that is more uplifting than this one, and in time, this reality will begin to shift. Fake it until you make it. That's how manifestation occurs. Take responsibility for having a Source connection, and being a creator. Be selective and precise in your creations. .

That is the message I'm getting/seeing/hearing.

For further investigations into how we are living in a consciousness based Universe that is affected by our thoughts, these two books are ones that you must read. These books are 2 of the most important books I've ever read. One makes you realize what is possible, the other explains how to put it into action. Read together, these 2 books will shift your entire concept of reality, allowing you to access your full potential. They will give you a very clear path to manifesting a new future, by using the power of your mind.

Michael Talbot admitted in private, that he did not write his book, "The Holographic Universe." As it turns out, he was an abductee. He told Budd Hopkins, his therapist, that he channeled the entire book. ET's gave him all of the information, and he turned it into a book. This is a book that was given to Humans, by a higher race, indirectly. Michael Talbot paid a high price for releasing this channeled information; he died shortly after publishing his channeled masterpiece. This book provides many scientific examples about why our reality is really just a simulation, not a natural world, as well as truly incredible stories about Humans who possessed supernatural abilities. This was by far the most profound, life altering book, I've ever read.

This next book is simply the best book there is on the "Law of Attraction." I've studied these concepts for a very long time, but reading this book is like reading a book given to you by the Gods. Because it is a book from the Gods. This is another book that was channeled, given to Esther Hicks, who was able to learn channeling, and has been a longtime respected author and public figure. She is one of the real channels, and when you read this book, you'll be shocked at just how powerful the message is. It's likely you've never considered the exact method that we should use to create reality. This book covers the exact method that you should use to create reality, and it explains it in a way that is complete, unlike all the other books which talk mostly about positive intentions. This book teaches a method of changing your reality, even when your reality is very difficult, and things are not going well. For me, this was a life changing book, and that's why I am recommending it as a must read, along with the book mentioned above.